He takes over from James Oppong-Boanuh, who was appointed as police boss by President Akufo-Addo in October 2019.

A statement signed by Eugene Arhin, the Director of Communication at the Presidency, directed the current IGP to “embark on terminal leave with effect from August 1, pending his retirement from the Ghana Police Service on October 7.”

“Until a substantive IGP is appointed in accordance with the dictates of the Constitution, President Akufo-Addo has asked COP Dr Dampare to serve as the Acting IGP with effect from August 1.” 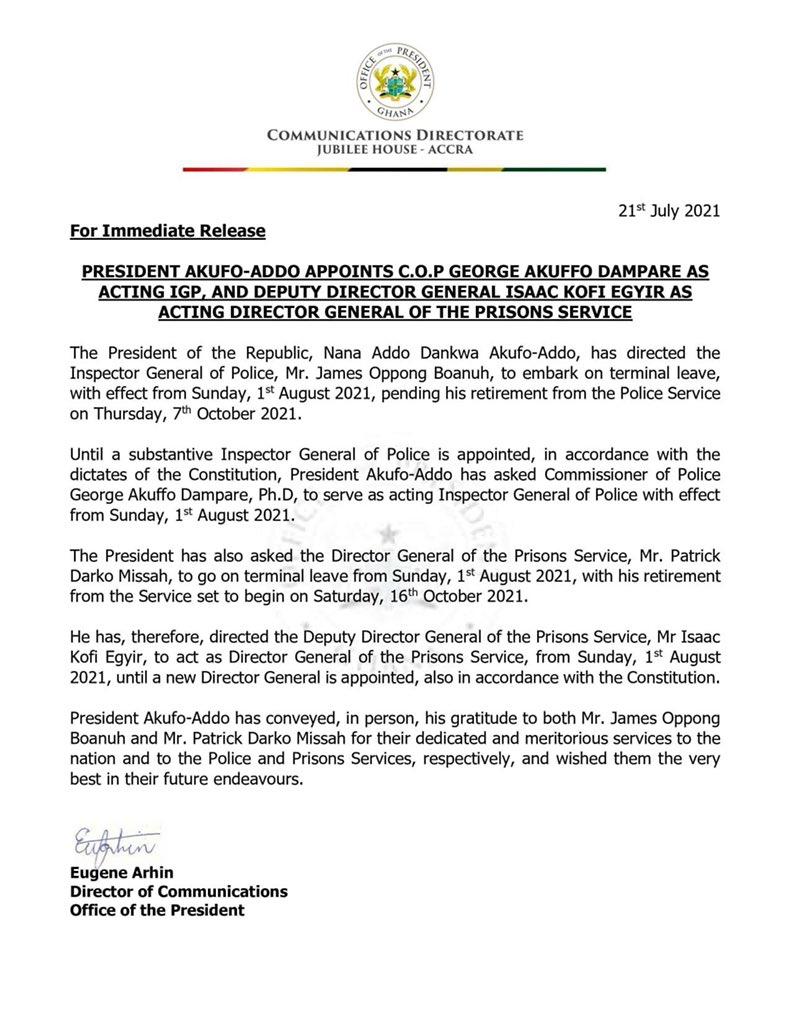 COP George Dampare until his appointment was the Director General in charge of Administration at the Service.

COP Dr George Akuffo Dampare has been in the Ghana Police Service for close to 30 years.

He joined the service as a Constable and has risen to the highest rank of Commissioner of Police, becoming one of the youngest Police Officers to have attained this in recent years.

COP Dr Akuffo Dampare became a chartered accountant at the age of 25 while serving as a Police Constable and currently holds a PhD in Finance.

He has been an Adjunct Lecturer at the Ghana Institute of Management and Public Administration (GIMPA) and at the University Of Cape Coast in Ghana.

Amongst his credentials; George Akuffo Dampare (PhD) was a Special Assistant to the Regional Commander, United Nations Mission in Bosnia Herzegovina, Municipal Police Commander, Cape Coast, ADC to the Vice President of Ghana, Accountant/Finance Officer, Ghana Police Service and the Head of Police and Narcotics Desk at the Ministry of Interior.

He has been credited for his lead role in the swift arrest of the alleged killer of former Abuakwa North MP, J.B. Danquah.